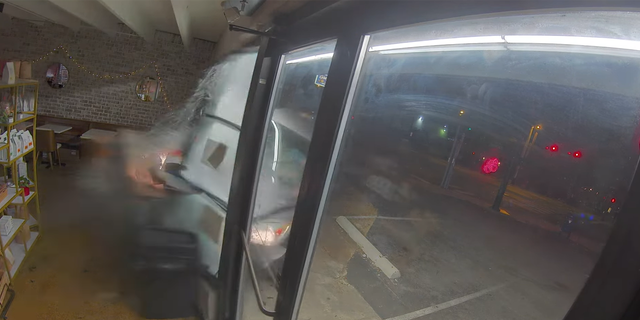 A security camera captured the moment a car crashed through the front wall of a donut shop in Nashville, Tennessee, this week.

The crash happened at approximately 3:30 a.m. Friday when a driver is seen in the video making a left turn at a green light before running over a curb and then hitting the windowed entrance of the store, WKRN-TV reported.

Rather than turning from the left lane into its perpendicular traffic-flowing lane at the intersection, the car overturns and crosses over the oncoming traffic lanes before ramming the store.

No one was in the shop at the time of the crash and the driver of the car was arrested, the Metro Nashville Police Department said.

TENNESSEE MAN ON THE RUN AFTER ALLEGEDLY SHOOTING POLICE OFFICER, DEAD AFTER SHOOTOUT WITH KENTUCKY POLICE

Sarah Flowers, 29, was subsequently charged with driving under the influence after Metro police said a breathalyzer test registered .218 or more than twice the legal limit to drive, WKRN reported.

Sarah Flowers, 29, was charged with driving under the influence after police said she crashed a car into a coffee shop on July 7, 2022.
(Metro Nashville Police Department)

The crash was initially discovered by a pastry chef who arrived to work Friday morning.

“My initial reaction was after learning no one was hurt, was ‘well, we’ve got another mess to clean up,'” Woodward told the outlet.

Stellantis: Car market could collapse if EVs don’t get

One of Europe’s biggest automakers warned after a deal to phase out combustion engines that the industry is doomed unless EVs get less expensive.

Stellantis is aiming to cut the cost of making electric vehicles 40 percent by 2030, Chief Manufacturing Officer Arnaud Deboeuf said Wednesday. The producer of Fiats, Rams, Jeeps and Peugeots, among others, plans to manufacture some parts in-house and also pressure suppliers to cut the price of their products.

If EVs don’t get cheaper, “the market will collapse,” Deboeuf said at the company’s Tremery factory in France. “It’s a big challenge.”

Stellantis is planning to introduce more than 75 fully electric models this decade and transform at least some of its French car plants to make EVs. While the company is spending big on the rollout, it’s pledging to maintain strong returns, relying on extra revenue from software and services as well as some premium vehicles.

EV prices are going up quickly. Tesla raised prices as much as $6,000 per car this month, following similar hikes earlier this year from Rivian, Hummer and Ford. Rising raw-materials costs are rendering some battery-powered models unprofitable, Ford Chief Financial Officer John Lawler said at an investor conference earlier this month.

European Union countries this week endorsed a push to eliminate carbon emissions from new cars by 2035. With EU lawmakers in favor of giving up fossil fuels in the auto industry, it’s highly likely that most manufacturers will have to shift to producing EVs in little more than a decade.

While Stellantis will comply with the decision, policy makers appear to “not care” whether automakers have enough raw materials to underpin the shift, Chief Executive Officer Carlos Tavares said Wednesday.