Lookers chief people officer Chris Whittaker has voiced fears the cost-of-living crisis affecting the car retail sector’s workforce is “not going to be a short-lived”.

Whittaker expressed his concern for the duration of the challenge facing the sector and its employees as he spoke to AM about a overhaul of the AM100 car retail group’s terms of employment to deliver a Lookers Living Wage across its network of dealerships.

He said that the shift, part of a drive to make Lookers an “employer of choice”, had been completed in August.

Backdated to July, the scheme ensures all but the PLC’s apprentices now earn above the National Living Wage, with apprentices paid around 55% more than the recommended level in year one of their training.

But Whittaker conceded that it was “extremely tough at the moment” as he considered the double-digit inflation impacting Lookers’ workforce.

“We really went hard at our pay structure and we’re happy with the outcome.

“With inflation at the levels that we are seeing it is hard to know what you can do as an employer beyond a certain point.

“I think we’re very much aware that this is a challenge that is not going to be a short-lived, but we have made considerable changes to our pay structure and we’re working hard to help staff make their wage go further with our range of company benefits.

“The biggest commitment we can make is that of maintaining a sustainable business.”

Whittaker said that Lookers’ rebalanced wage structure at Lookers had also seen a shift towards a better basic wage for sales executives, with on-target earnings (OTE) now accounted for “approaching 50%” of their salaries.

As well as boosting retention, Whittaker hopes the group’s efforts will also boost recruitment at a time when staff are hard to find.

A new Jump Start programme has been specifically designed to draw newcomers into the sector. Whittaker said: “It primarily appeals to a younger generation, but it’s intended as a route into the sector for anyone wanting a career in sales.

“So far, we’ve had 100 people through the programme and the impact on some dealerships has been marked. I find myself walking around and marvelling at how young a lot of our teams are starting to look.”

Aftersales has been equally challenging for retention and recruitment, Whittaker admitted, and the business has worked to implement a structured development path alongside a renewed wage structure.

Changing working patterns across the business have called for new levels of “trust”, according to Whittaker.

Despite investing heavily in a new headquarters in Altrincham (check?) Lookers continues to embrace hybrid working for roles where people can operate from home.

Explaining the change of mindset that underpins the change, Whittaker said: “Things changed like we had never imagined during COVID and we have continued with hybrid working where its appropriate with solo project work.

“We never wanted to fix days when people had to come into the office, so we do ask for two days, but it’s flexible.”

He added: “The work that’s been done to our HQ has created a really impressive space and hopefully somewhere people want to come to work. 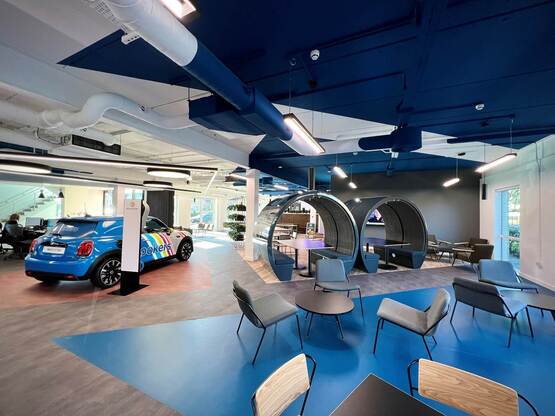 “But it’s not just for those HQ office functions anymore. There’s something for everyone and we want people from across the business to come and spend time there.”

As well as committing resource to look after employees’ wellbeing through partnerships with Mind and a SmartHealth benefits package, Lookers is aiming to grow the diversity of its workforce.

Whittaker said that this was a challenge being approached in a “measured way”.

While chief executive Mark Raban – the AM Awards’ Business Leader of the Year 2022 – and Whittaker are both patrons of the Automotive 30% Club, efforts to drive more diverse representation will be informed by an audit recently commissioned from the Clear Company.

“We can throw ideas at a wall or invest in what is going to be a very in-depth audit and really get an understanding of how people feel and what the best way forward is,” said Whittaker.

“There’s a lot of change happening in Lookers, and the sector as a whole, and we want to be sure that we are leading the way by doing things the right way.”